We study both the underlying cryptographic algorithms and firmware related vulnerabilities for iOS in protecting against attackers exploiting the mobile device.
2. Summary of Findings

We have analyzed iOS system where cryptography architecture and algorithms are applied, and suggested where and how possibly certain attacks can be exploited against device protection.
We have parsed new iOS firmware format and extracted latest SHSH blobs for firmware code sign. Firmware of new version is not allowed to downgrade to old version beyond Apple's time window. We study the possibility to break that limitation, where device can be boot with either "patched" firmware or downgraded version, both of which thus may contain exploitable vulnerabilities.
We have partially extracted some low-level derived AES keys from iOS firmware. These encryption keys are derived from hardware keys, and can be intercepted if we break the kernel.

We have analyzed iOS system where cryptography architecture and algorithms are applied, and suggested where and how possibly certain attacks can be exploited against device protection. Review on latest iOS security research papers show that AES and Hash/MAC cryptographic algorithms are subtly applied in the code sign design.

Hardware
Apple has built encryption into the hardware and firmware of its iPads and iPhones. Every iOS device has a dedicated AES 256-bit crypto processor that sits between the flash storage and main system memory. The engine works in conjunction with the SHA-1 cryptographic hash function – which is implemented in the hardware as well -- to reduce overhead for cryptographic operations.

Keys
There are two "master keys" for iOS devices.

Algorithms
The UID key as 256-bit AES key is used to create a key called “key0x89b.” Key0x89b is used in encrypting the device’s flash disk. Because this key is unique to the device, and cannot be extracted from the device, it is impossible to remove the flash memory from one iPhone and transfer it to another, or to read it offline. 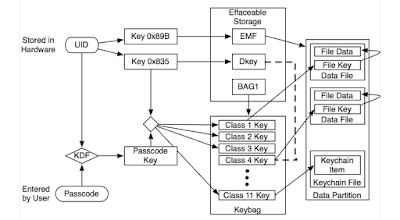 The iPhone device comes with built-in encryption keys, UID and GID. These two hard-coded keys are used only for boot-loader in kernel mode. Although unable to read these hard-coded keys, the iOS running on the device can generate other encryption keys which are used for data protection, keychain encryption, and code sign. We discuss the techniques about extracting those derived AES keys.

iOS firmware of new version could be downgraded to old version with Apple's time window. Beyond that given time window, iOS firmware is unable to recover to old version. We take a deep look into the technique to break that limitation. If it comes possible, one can boot the iOS device with either "patched" firmware or downgraded version, both of which thus may contain exploitable vulnerabilities.
In order to extract firmware decryption key, we firstly look into IPSW firmware structure: 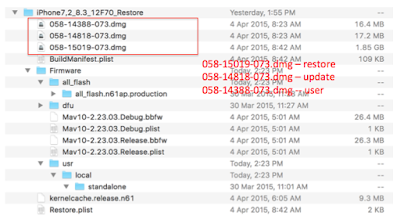 New IM4P Format
IMG4 firmware format is not widely studied although SL8900/IMG3 format is well-known. No existing decryption key is available for iPhone6 with iOS 8.3 yet. The file is an DER encoded ASN.1 object and structured as follows:

Fig.4 A snapshot of IMG4 header.

Firmware keybag structure
Apple's IMG4 security scheme uses a data format called a KBAG, which is stored at the bottom of a firmware file. Specifically, the kernel uses the GID Key to decrypt encIV and encKey, then uses that key and IV to decrypt the DATA section of the file (the code itself). Here is the definition of Kbag structure (AES-128):

Fig.5 A sample by extracting kbags by Parsing IM4 File
The firmware decryption key may be further extracted from kbags.

Extracting SHSH blobs
Users are not allowed to downgrade (or upgrade) to iOS 8.3 after Apple closes the firmware signing window for iOS 8.3. Instead, they have to settle for whatever firmware Apple is signing, which is usually the latest. We firstly extract SHSH blobs to be prepared for possible downgrade ability.

Procedure:
–Step 1: Download latest TinyUmbrella and run.
–Step 2: Connect iOS device (it doesn’t have to be jailbroken)
–Step 3: Wait as TinyUmbrella fetches and saves blobs to file under “~/.tu/.shsh/” directory in Mac.


Defeating Fairplay Encryption for iOS App binaries
The decryption of iOS binaries can be achieved by launching the application in a GDB and extracting the unencrypted executable code. Although encryption and code signing were used, there is no much difficulty to recover the real executable code. There are already some tools like "Dumpdecrypte" which can automatically do all the above steps.

Cryptographic Function Hooking
One example is for networking, attacker can pay more attention to the Object-C crypto library, CCCrypt. Attacker can hook crypto functions on application layer without knowing much about the implementation of iOS cryptography.